Wool Broker of the Year Award 2012

The winner of the inaugural Wool Broker of the Year award was announced at the Wool Week Dinner in Melbourne.

The winner was Kelvin Shelley of Australian Wool Network.

Kelvin grew up on a mixed farming enterprise near Ballarat and developed an interest in sheep and wool whilst visiting and working on the farms of relatives in the Wimmera district.

After completing a Certificate in Agriculture at the Gordon Institute in Geelong Kelvin went on to work at wool brokers Lempriere, Fox and Lillie (now Fox & Lillie Rural) for two years where he got a good grounding in all aspects of wool broking, ranging from working in the bulk class department through to setting up and running the wool show floor. For the past five years Kelvin has worked for wool brokers Australian Wool Network, travelling the Geelong - Ararat region as well as auctioneering. 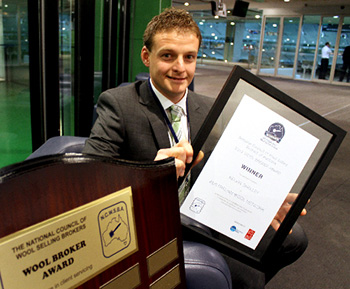 The award was introduced this year by the National Council of Wool Selling Brokers (NCWSBA) to recognise and reward excellence in client servicing, auctioneering and innovation by a wool broker working for a NCWSBA member. Broker staff who have been working in any role in the wool broking industry for 10 years or less were eligible to apply.

As winner Kelvin will receive an airfare, accommodation and Congress fees for the IWTO Congress to be held in Biella, Italy between 19th and 21st June 2013. Kelvin intends to visit the specialist woollen mills in Biella following the conference and expects to expand his wool processing knowledge and develop relationships with the traditional Italian mills.